Assign Tasks to Queues in Salesforce

Salesforce core platform provides many great features and automation tools to enable users from different teams to work collaboratively and efficiently. Amongst these, user queues and tasks are 2 common features.

User queues help your teams to manage a case, leads and other objects in collaboration and a group of users can own a record collectively. Cases and leads can be assigned to both users and queues.

Salesforce task is another functionality in Salesforce which helps to keep track of activities and to-do lists associated with leads, campaigns and other standard objects in Salesforce. Tasks can be leveraged to remind and assign users about the actions that need to be taken from their end. In order to enhance the productivity of users working on Salesforce, Salesforce provides with out of box automation & shortcuts to create and update tasks, provides predefined task templates and enables users to assign a task to multiple/bulk users in a single click.

Salesforce provides the option for Cases & Leads to be assigned to queues so that agents could pick those up according to their availability. However, the ability to assign tasks to a queue was missing for a long. This was making it difficult for teams as assigning a task to a group of users (public group) was creating individual tasks for all users whereas the requirements were to notify about a task to a group of users and allow one of them to complete it according to bandwidth availability.

This idea has been requested on IdeaExchange by Salesforce users. After the idea got a considerable amount of support from all the users, Salesforce has decided to add this feature as a standard functionality of Tasks. Salesforce released this capability to assign a task to a queue in its latest release - Spring 20. 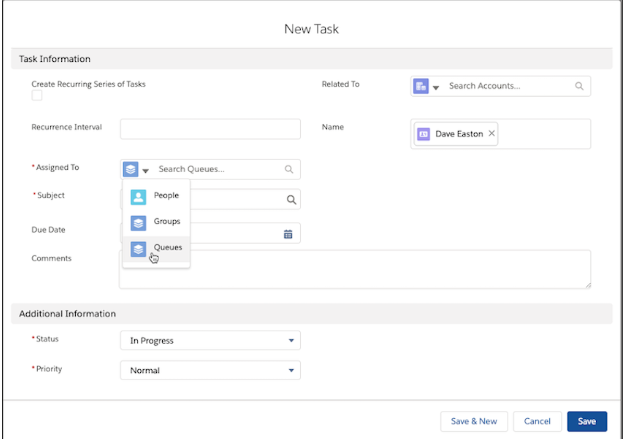 As part of this functionality:

The only thing that you need to do as a prework is to add “Task” as a supported object within Setup in Salesforce.

By introducing this functionality, Salesforce has finally solved the issues faced by multiple customers who were not able to assign tasks and hence had to wait for the stage of record to get updated to get a different team to work on it. With this, users can assign tasks to different teams(finance, procurement, etc) to check on their end while they are still working on a different aspect of the record.